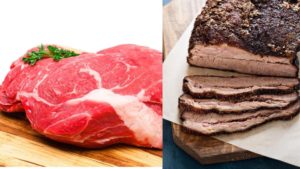 Across the world, various kinds of meats are being consumed. Mostly, in a specific area, specific meat is predominantly consumed. This depends particularly upon the traditions and customs being adopted in that area. According to studies, Poultry or white meat is the most consumed meat across the globe. Still, a huge population prefers red meat over white meat. Red meat enthusiasts love to cook in beef when it comes to grilling at any household party.

In beef meat, or preferably be called red meat, there are several exclusive cuts. These special and exquisite cuts include chuck, plate, flank, shank, rib, sirloin, loin and brisket. All of these cuts vary in their origin and are obtained from different sites. Here we mainly are concerned with Chuck roast and Brisket. This article is mainly going to focus on the similarities and differences between Chuck Roast Vs Brisket.

We are going to discuss each one of them individually. After discussing them one by one, we will compile a comparison of Chuck Roast Vs Brisket; how they differ in their sites of origin, the way they are cooked and served and to what extent they differ in taste.

What is Chuck Roast?

Chuck is the shoulder cut portion of beef. Chuck contains relatively more fat content than that of brisket and thus is tenderer. Meat with larger quantities of fat is more tender and takes less time to get cooked than those with less fat concentration.

Chuck roast is an inexpensive cut of meat obtained from the area between a cow’s shoulder and neck. Chuck roast is a bit less tough as compared to that brisket and contains more fat. When it melts during cooking, this fat adds much more flavour to the meat.

Chuck roast is one of the primal cuts and is one of the most preferred cuts. It is very much preferred when making a stew or steak. Chuck roast contains a round bone laced with lean meat. When this chuck roast piece is cooked, it emits flavours that are matchless.

What is a Brisket?

Brisket is a beef cut that comes from the lower part of the cow’s belly. It can precisely be said that it is the part of the pectoralis muscle of the cow. Brisket contains a relatively larger amount of fat and thus has a strong flavour. Brisket is a bit tougher than that of a chuck roast, and thus it needs to be cooked for a longer duration to time to make it get cooked to perfection.

The high-fat content of a brisket gives it an indulgent flavour. For people who love o eat fatty dishes, a brisket cooked over low heat is going to be a perfect option.

How are they Cooked?

The cooking method differs both in the case of chuck roast Vs a brisket. Since the two types of meat have a little difference in texture, almost the same methods can be used to cook the meats. Still, to achieve perfection in cooking a chuck roast and a brisket, one has to adopt different cooking methods.

How is a Chuck Roast Cooked?

A chuck roast is seared on all sides before cooking. This searing will be helpful in providing those fine and crispy edges to the chuck roast. When it is cooked later on over low heat, it will give out a richer taste to the food.

If the chuck roast is not cooked properly, it becomes chewy. The chewiness of that meat then adds not so pleasant effect to your food. This may ruin your meat experience, and one would never want it. Thus, you need to cook your meat properly in order to enjoy a flavorful meal.

How is a Brisket Cooked?

You need to cook brisket for a long time on a slower heat. Since brisket is tough, it takes longer for it to be cooked. Keep the brisket on low heat and let it cook for some time. After that, flip over the brisket and let it cook on the other side properly. A brisket will take a longer time to get cooked.

When slowly cooked, the taste will slowly infuse into the meat, making the meat much more flavorful and richer in taste, which you can enjoy with delight.

Though both the meats are very similar, they still vary in many aspects, starting from their texture to their flavour. Following are some of the differentiating points of chuck roast Vs brisket.

Site from where cuts are obtained:

Both chuck roast and brisket are the two most primal cuts of beef. They vary in their origin sites from where they are obtained. Chuck roast is obtained from the neck region of the cow, mainly between the neck and shoulder. On the other hand, brisket is the part of beef taken from the lower portion of the cow’s neck, mainly part of the pectoralis muscle of the cow.

Chuck roast texture is less tough than that of a brisket. Chuck roast, when cooked properly, comes out as a very tender piece of meat. Brisket is a bit tougher than chuck roast and takes more time to cook. After a long time of cooking over low heat for hours, brisket becomes tender.

Chuck roast, without any doubt, is more flavorful than brisket and has rich and indulgent flavours. Brisket is also very tender with pronounced and rich flavours, but chuck roast here wins the argument.

The cooking time of both the cuts depends upon the degree of chewiness you want from your meat. The more you cook the meat, the tenderer it will get. Chuck roast usually takes less time to get cooked, and brisket takes slightly more time than that of a chuck roast.

Both chuck roast and brisket are lean meats obtained from the shoulder region of the cow, with enhanced flavours of meat and richness of aroma.

Prepare the chuck roast: Grab that perfect piece of chuck roast and rinse it under running cold tap water. Thoroughly clean the piece and pat dry with a paper towel. After cleaning the meat, apply cuts on it with the help of a sharp knife or blade. This is done for the seasoning to properly make its way through the meat.

Make the seasoning as per your requirement. You can add spices as much or as little as you like, but the standard seasoning that you can add to your meat is;

Add all the ingredients to a bowl and mix them. Now massage the seasoning on the meat thoroughly and let the meat settle in the refrigerator for almost 4 hours.

Whichever smoker you have, plug it in and preheat at 180 degrees for almost 15 minutes. Add charcoal about half the amount of normally used charcoal to have a slow heat effect.

Place the seasoned chuck roast meat over the smoker and let it cook slowly over 200 to 230 degrees Fahrenheit. Slowly the meat will get cooked, and you can check the progress by taking a small piece of meat and checking for the doneness.

Once the meat is done and is completely cooked to perfection, serve it with beans, rice or any other side dish that you have prepared for your gathering and enjoy your meal.

The procedure for making a roasted brisket is much similar to that of a chuck roast. You can follow the similar steps that you did for the Chuck roast, and you are ready to go. All you need to do is:

take a good piece of biscuit and rinse it with cold water. After you have rinsed it with water, Pat dry the brisket and season it with spices that you prefer. Seasoning can be prepared by taking the following spices in the mentioned quantities for 5 pounds of brisket:

· 2 tablespoons of ginger and garlic paste

· one tablespoon of Mixed Herbs

Prepare and apply the seasoning onto the meat:

Apply this seasoning to the brisket thoroughly and keep the brisket marinated for as much time as you can. The longer you marinate the brisket, the more flavorful it will become.

Now place the marinated brisket in the pan and cover the pan with a lid. Slow cook the brisket for a long period of time to attain that perfect flavour, taste, and tenderness. Flip the brisket once you think that one of its sides is done at check regularly to see how much degree your brisket has been cooked.

Once the brisket is cooked, dish out the brisket and serve it along with rice or sautéed vegetables.

The above article explains everything about a chuck roast and a brisket. Here is complete information about what a chapter and a brisket is, the basic difference between their texture and flavours, and how they are cooked. We hope that this information will help you along the way.