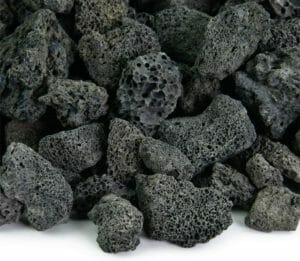 The grilling industry is largely based upon the concept of producing smoke to add that nice smokey flavor to your food, which is the royalty of traditional grilled food. In earlier times, this purpose was accomplished using one of the conventional methods, which is by using lava rocks. A barrier was made using the lava rocks beneath the cooking surface. When the drippings from the food being cooked fell onto that hot barrier, they produced smoke. That smoke then, in turn, gave an amazing smoky flavor to the food.

If these lava rocks were this beneficial, why are they not used anymore? Why don’t gas grills use lava rocks anymore? This question arises very often. We are here to answer this much logical question step by step by explaining all the aspects included.

Before finding the answer to this question, let’s find out what these lava rocks are, where they are found, how they are arranged and how they actually work to create the smoke.

Lava rocks are basically those rocks that are erupted from a volcano. They are used for a number of purposes. They are extensively used in the gardens for decoration purposes and for building small fountains in the front gardens and small park areas. Another very basic use of these lava rocks is in the grilling industry, where they create smoke and give the food a good and nice flavor of smoke.

Lava rocks are hard and hold this exceptional tendency to hold heat. A barrier of these lava rocks is made beneath the grill, which heats up and then provides both heat and smoke. When the food is being cooked, drippings from the food fell onto the fire and produced smoke.

Along with a number of benefits of using these lava rocks in gas grills, a few drawbacks are also there which have restricted their use in the gas grills. Nowadays, most gas grills don’t use lava rocks for a number of reasons. The major ones are explained here in this article.

Lava rocks were used to vaporize the drippings and produce smoke, which infused that smoky flavor into your food. Although these were considered quite beneficial, lava rocks had their own pitfalls. As lava rocks are porous, they absorb the drippings until they are fully saturated.

If they are not cleaned regularly, these filled-up drippings will provide habitat to certain bacteria, which may prove harmful for health. In this way, these lava rocks might compromise food hygiene and so may make the use of lava rocks questionable.

Due to harboring bacteria, food cooked over these lava rocks may prove harmful for health due to being contaminated and containing bacterial products and toxins through the smoke. Moreover, the excessively charred food may sometimes contain carcinogenic substances, which pose a great threat to health.

Besides health risks, accumulated oil and grease may result in the production of excessive smoke, which may prove troublesome to work with. This has limited the use of lava rocks in the gas grills.

Why were lava rocks used anyway?

There are a number of reasons due to which lava rocks were used.

The question arises, what should be the ultimate replacement for these lava rocks? The answer is the technology always finds a way. The advanced solution to solve this lava rocks issue is the ceramic briquettes. A briquette is basically a block of compressed coal dust or peat which is used as fuel. They work exactly in the same way as lava rocks, also providing a number of other benefits. They don’t absorb any oil and grease and thus are much easy to clean without imposing any health risk.

Lava rocks are not used for a number of reasons, be it excessive smoke or health issues. Their alternatives, ceramic briquettes, are nowadays replacing them.